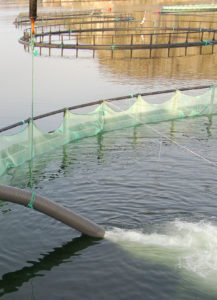 Transfer delays to seawater are no longer a problem for robust, synchronised smolt

FISH welfare after sea transfer is one of the biggest challenges in salmon farming – but it doesn’t have to be. The delicate process of smoltification – turning freshwater salmon parr into sea-ready smolt – is no easy thing to facilitate in a production setting. That is evident when examining production results during the first month after transfer. Reduced growth performance and increased mortality has historically been the norm rather than the exception.

The reason is that some of the fish group have not reached a robust smolt status before transfer and/or are already on the way to desmoltification.
In fact, most traditionally produced smolt groups will probably contain both parr, smolt and desmoltified fish at the time of transfer, because there is no reliable way to fully synchronise the smoltification process using photo period smoltification.

Caption Above: The mortality and growth performance during the first months after transfer to marine sites will inevitably reveal how well prepared the fish was for its new surroundings.

Stress is a killer

This is, of course, a massive welfare problem. Placing fish in seawater that have not built up a tolerance to that environment means one of two things. The fish will either die of osmoregulation problems, or they will survive, but at great discomfort, eating poorly and with stress levels that turn them into magnets for parasites and disease.

Recent research (Sveen, Nofima, 2018) shows that the main gene class affected by stress is immune system genes. Stressed fish lose their protective mucus coating, their wounds heal slower and they become more susceptible to disease. So, not only does sub-par smoltification mean poor welfare and suffering for failed smolts and large pseudo smolts, it also increases the risk of serious biological problems for the entire fish group. 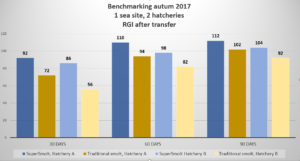 Caption Left: The chart describes a large-scale benchmarking project using 800,000 smolts. In two separate Norwegian hatcheries the fish groups were divided and smoltified using SuperSmolt Feed Only and light control, respectively. The smolt was transferred to the same site during the same week. In both cases the SuperSmolt groups performed significantly better post transfer.

A better way
SuperSmolt Feed Only has increasingly taken over from traditional photo period smoltification in all major salmon producing countries, at the same time significantly reducing the welfare and mortality issues related to smoltification. The experience gathered builds on more than 400 million ‘supersmolts’ produced in Scotland, Norway, Chile, Canada and Tasmania.

The simple, feed based smoltification method solves several problems. Firstly, there is no need for a growth inhibiting winter photo period as the entire process is achieved under full light, allowing the fish to grow normally. Smoltification is fast and predictable (smoltification achieved in three to four weeks) and allows for more reliable production planning.

SuperSmolt Feed Only allows the smolt to be transferred one to two weeks earlier to sea, or the fish farmer may choose to transfer larger smolt at the usual transfer time.

And crucially – for fish welfare – fish receiving SuperSmolt Feed Only will not desmoltify. This allows every fish in the group to achieve a robust smolt status before transfer.

Having the flexibility to extend the smolt window in this way means that the smolt are happy and comfortable to remain in freshwater until every fish is ready, and transfer delays – caused by, for example, bad weather, well boat supply or other reasons – are no longer a problem.

A fully synchronised smolt group will thrive at sea from day one, with no fish experiencing discomfort relating to osmoregulation. The fish will eat well and grow normally. 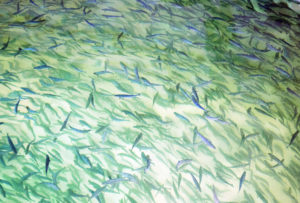 Caption Left: SuperSmolt Feed Only allows the fish to grow optimally under full light throughout the hatchery smoltification process.

The science behind it
On the cell walls of every organ included in the smoltification process (pineal body, the hypothalamus, pituitary gland, kidneys, intestines, gills and skin) there are a type of receptor called Calcium Sensing Receptors (CaSR). Natural additives in the SuperSmolt feed stimulate these receptors, providing a smoltification response. The feed also includes free amino acids (tryptophan) that stimulate the brain to commence smoltification.

Tryptophan is a precursor of the neurotransmitter serotonin, the melatonin hormone, and vitamin B3. When using traditional light control, the pineal body in the epiphysis is stimulated to produce melatonin as part of darkness stimuli, which via the hypothalamus affects the hypophysis. SuperSmolt stimulates the hypophysis directly by using free L-tryptophane in feed, which via the hypophysis releases endocrine signals. These signals contribute to the smoltification as well as changes in metabolism, morphology and behaviour. It is shown that free L-tryptophane in feed has a lasting impact on the brain and provides the fish with an improved stress response.

Patented technology
STIM (previously Europharma) recently received the patent for SuperSmolt Feed Only from the European Patent Office (EPO), recognising it as a significant industry innovation after four years of rigorous scientific scrutiny.

SuperSmolt Feed Only is built on the original SuperSmolt formula, which included salts added to the production water as well as feed.

‘Developing a feed only formulation that achieved the same results as the original SuperSmolt programme was a significant challenge. When STIM finally succeeded, the market responded immediately. SuperSmolt Feed Only is so much easier and more practical to use. The number of fish produced with SuperSmolt technology has increased every year since the launch in 2014, said Campbell Morrison, key accounts manager at STIM Scotland’.